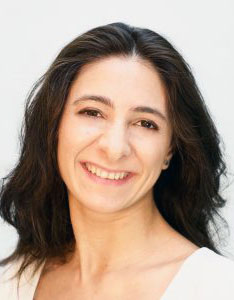 Nino grew up in Tbilisi, Georgia (Europe), where she studied ballet performance following the Vaganova method at the Vakhtang Chabukiani State Ballet School. She attended the Shota Rustaveli Film and Theater State University, majoring in Ballet and Folk Dance Education, and wrote her senior thesis on theatrical choreography. After graduation, Nino began working as a choreographer, dancer, and dance instructor. She was a member of the Georgian State Ballet and Opera Theatre, and  appeared in numerous venues in Tbilisi, including the Vaso Abashidze Music and Drama State Theater. Nino’s choreography has been performed at the Akaki Khorava Actor House theater, as well as at her alma mater. She has also performed with and choreographed for the Tengiz Avalishvili & Company musical theatre company, among others. Nino taught ballet, musical theater dance, and movement at schools and universities around Tbilisi including the State Acrobatic School, her alma mater, and the Sulkhan Tsintsadze Art School, where her choreography received top prizes for musical theater performance in the Tbilisi Mayoral Art School Competition. Nino has choreographed flash mob events for the non-profit Coalition for Justice and the American Chamber of Commerce in Georgia. Nino is the founder and director of “The Living Word” drama group, which stages dramatizations of the lives of Georgian historical literary figures through excerpts from their written works.